As a child, one of my favorite games to play with family and friends was Hide and Seek. I can’t describe what it is about the game–the challenge of trying to find a secret, hidden place in the house or the careful pursuit of tracking down your friends who so magically disappeared as soon as you counted to ten. I also love most variations of Hide and Go Seek, too, but what I probably love most about Hide and Seek is that I’ve never outgrown it.

Champion of Hide and Seek

I played it as a kid in elementary school with my friends on the playground. I played it with my soccer team in middle school. And in high school, I even played it in France with a group of Americans and our French chaperones. (In French, the game is called cache-cache: hide-hide.) In college, I remember the first or second weekend playing a big game with a church group (except it was also a race, so we had to run/sprint the entire time–will never play again like that ? ). Even in Andorra, I played cache-cache with my host sister and hid in my host brother’s closet (she never found me, by the way ?).

Since the last time I played Hide and Seek was in Andorra where I remained unfound by my host sister, I think it’s safe to say that over the years, I’ve gotten pretty good at hiding. When I don’t want to be found, I know how to retreat. And when it’s a rainy day outside or a storm brewing inside, I cover myself with the protection of an umbrella or a warm blanket.

My Instinct to Hide

My senior year of college, I had to write a senior thesis for the Honors College. Thankfully, as a liberal arts college, the Honors College truly gave me the liberty to chose any topic, project, subject, or passion as long as it included a writing component and a research component. While at first, the thought of writing a senior thesis frightens most people, including me, I later realized that this thesis was an opportunity. It was an opportunity to create and to learn what every I desired and get college credit. As a writer, I had actually struck gold without knowing it.

So for my thesis, I researched the writings of two influential leaders of the Protestant Reformation of the 1500s, Martin Luther and Dietrich Bonhoeffer, both of whom significantly shaped the modern day Evangelical church. The themes that I gleaned from those writings became the themes of a book that I wrote. This book, Blue Eyes, was the written component of my senior thesis, and it is basically my first child. (More about Blue Eyes in a later post…)

Anyway, during the research phase of my thesis, I was extremely challenged, not just intellectually, but spiritually. Martin Luther’s piece The Freedom of a Christian really struck a chord with me as it relates to the instinct to hide.

In other words, as I often tell my friends, Martin Luther came for my life…but only because Jesus came for his first.

You see, Martin Luther was actually a monk before he was a pastor or the leader of the Protestant Reformation. Before he became super influential or a grand leader, he was just a monk. He lived a very pious, simple life in a monastery and didn’t interact with the outside world at all. He was the first “Champion of Hide and Seek.” 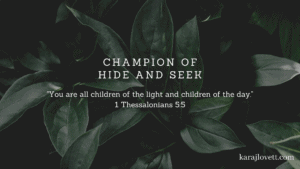 Live In the World by Not Of It

And not of it.

Jesus prayed to God about his disciples in John 17, saying:

The year is 2020. It’s election year, and I guarantee you, it will a hodge-podge mess. It will be a chaos, as we would say in Andorra. On top of that, with the uncertainty of the coronavirus, the increase of natural disasters, the danger of war and conflict between nations–I feel like the chaos is just beginning. And my first instinct is to hide.

Close the door, lock the deadbolt, put a cover over my eyes, and hide. Get on a plane, go far far away, and move to an island where none of the madness can find me. If that’s you, too, then I get it.

But that is not what the Lord has commanded of us. By choosing to be a monk, Martin Luther realized that he was actually running from the will of God. Jesus states clearly that He doesn’t want Christians to be of the world or characterized by the world, but He also doesn’t say anything about his followers staying in the “holy huddle” forever.

No, Jesus sent us into the world. He does not save us and intercede for us, so that we may hide away. He saves us and sanctifies us and then sends out into the world to walk in the light, even when the rest of the world is in darkness.

“You are all children of the light and children of the day. We do not belong to the night or to the darkness. So then, let us not be like others, who are asleep, but let us be awake and sober.” 1 Thessalonians 5:5-6 NIV 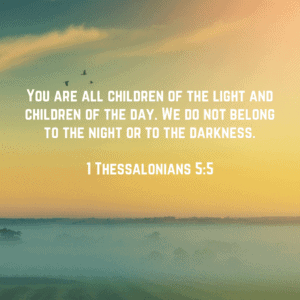 How can we shine?

It’s time for me to stop hiding. Times are tough now. The world is darker than ever now, but the light of Jesus is brighter. So today, how can we shine?

I’d say the first step is to stop hiding ? and pray for strength ⚔️. The champion of hide and seek is hanging up her cape. If you’re hanging up yours, too, here’s some more posts to encourage you along the way:

“But since we belong to the day, let us be sober, putting on faith and love as a breastplate, and the hope of salvation as a helmet.” 1 Thessalonians 5:8 NIV

Lastly, here is a great article from Desiring God about the phrase “In the world, but not of it” and what it truly means. I recommend it for those of you who would like to read more: https://www.desiringgod.org/articles/lets-revise-the-popular-phrase-in-but-not-of.

Don’t want to miss any future posts? You can subscribe here or using the form in the footer.

This site uses Akismet to reduce spam. Learn how your comment data is processed.

I’m a business consultant in corporate America by day and Christian blogger by night. More about Kara. >>

We use cookies to give you the best experience on our website. If you continue to use this site we will assume that you are happy with it.OkNoPrivacy policy